Ancient structures are relics of our imagination.

Archeology reveals a cognitive history, but perhaps thoughts are not the only products of the brain. The brain indulges in time while the body is left to figure out this moment. Culture ensures that values are passed on, yet less well preserved is the capacity of our own biology. One man’s courage has arguably done more for the progression of medical science than researchers who “investigate” from the comforts of their labs.

In a previous article, I shared how the Wim Hof Method (WHM) voluntarily engaged the immune system to prevent a nascent response to a severe flu-like endotoxin (Escherichia coli).

So much of our mental machinery is invested in external consumption. We consume social media like food, we consume, sex, drugs and alcohol to avoid feeling pain and we don’t want to be alone.

Wim Hof’s own struggle with depression triggered from the tragic death of his wife Olaya. She began to hear voices in her head and her battle with mental disorder abruptly ended in July 1995, when she jumped off the eighth floor of her parents’ apartment building in Pamplona, Spain.

A broken heart has a way of concentrating all our faith in one thing. The Wim Hof Method was born. The WHM is a daily practice consisting of:

We have an inbuilt mammalian mechanism that generates aversive feelings and avoidance behaviour to cold exposure. In the case of Wim Hof, physical endurance expanded his capacity to manage emotional pain. The science of the WHM is not for everybody however, for those interested, I shall share the science in one sentence and then speak english again:

This article suggests a stress-induced analgesic (pain relief) response in the Iceman.

No stranger to emotional pain, my own journey led me to the barbaric depths of the primeval lands. At a time when my heart was agitated with the tension of love, my pursuit for meaning lead to the Jungles of the Amazon and the wetlands of Kakadu. Seduced by the unknown, I kept running, to stop would mean facing this moment – the most hostile place to be alive. I eventually arrived in the Highlands of Papua New Guinea in January 2009. Here, for the first time, I saw scarification, the tribal rites that mark a visual distinction of one tribe from another. Marks that ironically originated from the need for stealth. When hidden by the secrets of the forest, cannibalistic hunters would kill without hesitation, if your markings didn’t resemble their own.

The fragility of life and death is not a case of morality but of survival and is part of daily existence. 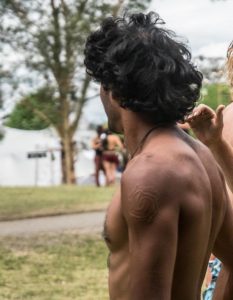 The barely visible line between life and death compelled me to risk my own life to feel alive at a time when my heart was haunted by emotional pain.

The journey into remote depths of this Earth became a search into the inner depths within myself. To discover for myself the difference between what is real and what is illusion, I bled the tears of my heart and a scar appeared on my own arm.

A blade carved out a pattern that was designed in my imagination and to test my belief that pain was an illusion, I used no pain killers, anaesthetic or mind altering substances. My own mental preparation is all that I had. While being cut, I mentally disassociated from the pain – entirely. Like an “out of body” experience, I could feel the pain but did not recognise it as my own. This was not some sort of sadistic satisfaction, no – quite the contrary. I wasn’t hurt. I was healed. I died, in order to live.

Beyond the pain barrier is a state of utter tranquility.

The men who dig for gold have overlooked the greatest wealth and without looking inside, they buried their soul alive. 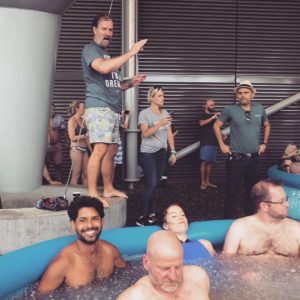 If you are seeing the world through the eyes of pain – don’t try to let it go. If you try to control the pain that comes and goes in waves, it will slip through your fingers. Let me show you how to use focused respiration to produce a relaxation response to pain and enhance positive effects through the release of self-induced cannabinoid from the periaqueductal gray (PAG) – the brain centre involved in the suppression of pain – see figure (a) above.

Instead of showing manners in a world where people’s intentions are not clear – let your nervous system heal the pain in your heart in realtime. See lesson 5. vagal breathing meditation. 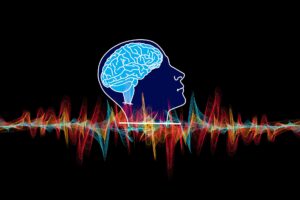